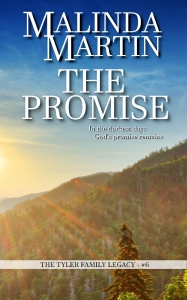 The Promise
Book 6 in the Tyler Family Legacy Series

David Tyler is living a completely different life. The singer/musician/songwriter is riding a wave of immense popularity, but it doesn’t compare to the joy and peace he’s found in his new relationship with God. Still, the woman of his dreams haunts him and he wonders if there is any hope of a future with her. On the advice of his brother-in-law, he pours his feelings into a song describing his heartfelt promise to her.

After experiencing true love and losing it, Elizabeth Paige has decided she’s ready to pursue a committed relationship with a Christian man and Todd Lindstrom is her first choice. But ghosts from her past, telling her abandonment is always around the corner, plague her. And the sudden appearance of flowers from a secret admirer adds to her concerns.

Back in Tennessee, Hank Donahue is comfortable in his life as husband, father, and assistant pastor of his father’s church. When tragedy strikes the Donahue family, he’s catapulted into a reality he’s not ready for, nor does he want. He’ll have to dig deep in his faith to trust in the promises of God.

Even in the darkest days, God’s promise remains. And can be trusted, in spite of our doubts.