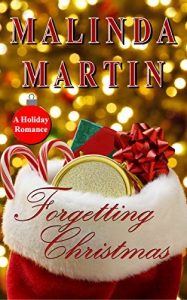 WOULD YOU EVER FORGET CHRISTMAS?

Ali Benson didn’t think she was capable of ever forgetting her favorite holiday. But when she wakes up from a car crash she discovers not only has she forgotten that it’s the holiday season, but she’s also forgotten the past six months of her life. Which wouldn’t be so bad except for a few pertinent facts. Apparently after a whirlwind courtship, she’s engaged to marry . . .
. . . her boss
. . . the one she’s secretly been in love with for years
. . . hater of all things Christmas.
And that wedding is scheduled for Christmas Day!
As her bruised mind scrambles to catch up, she tries to put the pieces together to remember her past and plan for her future.

Michael Grayson is in a hurry. He doesn’t have time for the celebrations and complications of Christmas. All he wants is to marry Ali and be done with it. But in order to do that he has to keep her from remembering. Or face her rejection.

Ali and Michael deal with the season in different ways as she tries to remember and he tries to forget. But this Christmas they’ll both have to confront the truth.
And hopefully find that sometimes remembering is the best part of Christmas.