I’m so happy to announce the release of book four of the Castle Clubhouse Romance Series: Where There’s Smoke 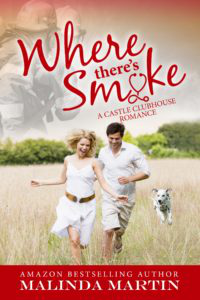 As they walked into the hospital, Joe said, “Rog, just a warning. I’m not talking about my dream, so don’t bring it up, okay?”

Thankful, Joe led the way to the front desk, where their good friend, Nurse Clare Whitman stood, vigilant as ever in her role as head nurse. Seeing the men approach, the thin brunette that didn’t look her age of sixty-three beamed at them and put down her pencil. “I didn’t know you were out on a run.” She looked around them and said, “Lose your patient?”

Smiling, Roger said, “No. Just out for supplies. How you doing, Clare?”

“Right as rain. But I heard Joe’s been having trouble sleeping.”

“I’ll bet. You know, a nice glass of milk before you go to bed might help you sleep. My father swore by it his entire life.”

“I’ll keep that in mind,” Joe muttered. Then to hopefully change the subject he said, “Hey, you got any of those extra-large bandages in the individual wrappers? They work great out in the field.”

Clare pulled out several files from the cabinet behind her. “Sure. In the supply room. How many can I mark you down for?”

“Joe, there’s Mrs. Brandon. I’m going to go ask her how her husband is. I’ll catch up with you.”

“No problem.” After requisitioning supplies from Clare, Joe walked to the large supply room at the back of the hospital. Inside, he first found an empty box and then started walking down the aisles, filling his box as if in his favorite big box store. He whistled a tune, happy to be working and delighted to be away from any talk about his dream.

He was so intent on what he was doing, he didn’t hear anyone in the next aisle over. When he turned the corner he ran so hard into another person that it sent the person tumbling down, her supplies falling all around her.

For a split second Joe was shocked that there had been another person, let alone that he’d collided with her. Then his mouth went dry and his eyes popped out of his head as he looked down to see a trim body in soft green scrubs, her face hidden by a wealth of beautiful wheat-colored hair pulled into a ponytail.

It was like a movie. Joe could hear the loud, building soundtrack playing in his mind as he waited for the woman to speak, to move. When she pushed her hair out of her eyes, she looked up and Joe lost all ability to speak. She was exquisite. Her face was slim, delicate even. Her eyes were a bright, emerald green that he’d never seen before. And her mouth. Her mouth! It was a beautiful rose pink, slightly open and inviting. Joe had never felt such a powerful attraction to a person in his life and as he studied the vision, he wondered how he’d been worthy of being in her presence.

Their eyes held for a moment, neither moving nor breathing.

Then like the needle of a record scratching through the beautiful soundtrack album, the vision spoke. Causing Joe to cringe.

“Well, thank you very much. That just made my day. Good thing I’m already in a hospital in case something’s broken.” As the woman dusted herself off and stood she looked at Joe, those green eyes sharp and glaring. “I thought you rescue guys were supposed to help emergencies, not create them.”

This was definitely not his dream girl.

The woman looked around and began picking up her supplies, trying to carry too much in her arms. Joe picked up his box of supplies that had fallen and watched as she tried to fit everything back in her arms. Finally, he said, “You know there are several boxes by the door. Why don’t you get one instead of trying to carrying everything?”

“Oh, he can talk. Incredible. Thanks for the tip, but I was doing fine before you came in here.” Using her hand to shoo him away she said, “Just go do your little fireman thing and leave the hospital to the professionals, huh?”

It was amazing how Joe could go from cheerful contentment to ethereal amazement to complete exasperation in the span of a few minutes. He watched as the woman continued to arrange things in her arms carefully, like building a house of cards.

An evil smile came over Joe’s face. He just couldn’t help himself. He reached down and picked up the last item the woman had been carrying, a jar of some sort of ointment. As the woman was carefully balancing her other burdens, Joe said, “Here, you forgot this one,” and placed the jar precariously on top of the other items.

As he’d thought, hoped really, everything in her arms fell again to the floor. She scowled at Joe, and if looks could kill, he’d be a pile of ashes on the floor about now. Trying to hold back a smirk, he said, “Aw. I’d stay and help you, but I have to go do my little fireman thing.” He started toward the door and said, “I’ll just leave it to the professionals.”

Then he walked out of the supply room, a huge smile on his face.

Clare and Roger were talking when he made it back to them. “Hey, I thought you were coming,” Joe said to his partner.

“Sorry. We got to talking about Mr. Branson and heart attack procedures. You get everything we need?”

Joe frowned thinking of the annoying woman he’d just left behind. “Yeah. Hey, Clare. You might want to check out the supply room. There’s someone masquerading as a health care worker back there. Very rude.”

“Hmm. I’ll check it out. Oh, before you two head out, I’d like you to meet someone.”

“Oh, yeah. Sharon said you were getting a new nurse,” Roger said. “Today her first day?”

Joe got a sinking sensation. Then to complete the feeling, he saw the obnoxious worker walking toward them, her arms filled with supplies. “Oh, no,” he muttered under his breath.

“There she is now. Chris, come say hello to two of the finest paramedics in L.A. County.” Clare rushed to take some of the woman’s burdens. Roger also went and received a smile from the woman. It irritated Joe.

When her eyes met Joe’s, her face completely shut down. She quickly looked back to Roger and said, “Nice to meet you.”

Clare began going on about the woman’s education and training. Apparently from some big hospital in Boston, Joe wasn’t paying attention. He was watching the woman avoid him. Which was fine to him.

“And you’re never going to believe this, but she’s—”

The walkie-talkie that Roger carried suddenly went off asking for Squad Fifteen’s status. They immediately left Clare and the woman and headed for their truck.

Joe said a quick prayer of thanks.

After the firemen left, Chris sighed in relief. That one man made her very uncomfortable. Maybe it was his eyes, intense and as brown as hot chocolate. Or it was the way his wavy hair framed a slim face with a smile that had literally made her go weak in the knees.

She mentally shook her head hard and tried to think of the smile as a smirk of superiority. Yeah, that was it. And very reminiscent of Graham, her last boyfriend. The last thing she needed in her life.

“Oh, thanks for the Vaseline,” Clare said, picking up the bottle of ointment that reminded Chris of the fireman’s manners.

She started putting the supplies up at the desk, hoping to get the fireman out of her mind, but Clare wouldn’t let that happen. “You’ll like working with Roger and Joe. They really are two of the best. Not only that, they both have good hearts.” Clare continued working on her paperwork as she spoke. “If I was in trouble, I can’t think of anyone else I’d rather have come help me.”

“Yeah, well I’m afraid I didn’t make too good an impression on one of them. The dark haired one.”

“Yeah. I’d just ignored another call from my brother, checking up on me, and I wasn’t in the best of moods when the fireman and I kinda . . . bumped into each other in the supply room.”

Chris frowned. “Is that what he said? Well, he wasn’t much the gentleman, I can tell you that. Trying to tell me how to do my job.” She blew out a breath, admitting to herself she had been a little rude to the man.

“I’m sure you two will like each other, once you get to know each other. So you have everything you need? Settling in okay?”

Chris smiled. She’d been so blessed to find this position. After the rough time in Boston, L.A. was a dream come true. To be near family and away from the past. She finally felt that she could breathe. “Yeah. I got everything I need.”

“Good. You be sure and let me know how things are going. And come to me if you have trouble with anyone. Including likeable firefighter paramedics.”

The statement had her mind back on the man. Darn it! Then she frowned as she looked over at Clare. “Did I hear that they were with Company Fifteen?”

For your copy of Where There’s Smoke, click here.